Showing posts from 2006
Show all 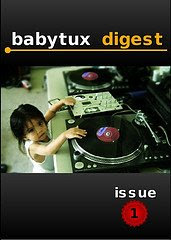 We are off the ground finally and the BabyTux Digest is 'officially' in circulation as an e-magazine. A bunch of people gathered at the 'Commons' Last evening for the launch. The final draft of the digest was presented by Arunan and most of the articles were explained by some of the authors present. Bud and I mentioned a few things about how it all started and future plans for the digest. Hasmin had some interesting ideas on marketing Free and Open Source Software (FOSS) in general, using popular idols as spokespersons. One of the best ideas I have heard in a while, which might work very well, if put to work. Kudos to all the authors who contributed articles and reviewers for their feedback. We already have around 14 authors ready to submit articles. This means a lot, since the digest is driven by the Sri Lankan FOSS community, voluntarily, with no monetary rewards whatsoever, at the moment. BabyTux digest is a free publication (Free as in 'Freedom' AND
Post a Comment
Read more

I had a great time at the Sri Lankan Dapper launch party last Saturday at The Excel World. I sincerely believe that 'Ubuntu' will be the Linux distribution that made Linux mainstream among the desktop users. With the Dapper release, they have improved so many things, which makes their moto "Linux for human beings" very realistic. For example, one of the first things I noticed last Saturday was how 'transparent' networking has become in Dapper. I have an Ethernet at home and was working on that right before I packed my laptop and came to the launch party. On arrival and while booting my laptop, Ubuntu has managed to detect the wifi at Excel World, connected to it and changed my default gateway to 'eth2', which is my wireless card. The result ?? The moment I finished booting, I have connected to Yahoo Messenger (with Gaim) and GMail (with firefox) with no interaction on my part at all. That's not all. When I went home that evening, it did the sa
Post a Comment
Read more

- May 29, 2006
Last Saturday I had the chance to get involved in the first Honda Meet in Sri Lanka and man there were some 'seriously' riced up hondas there. As a guy who is more into the 'clean' outlook as opposed to the 'ricey' look, I loved the elegant, black Honda S2000, which was there. Our guys at autoLanka has done an excellent job in organizing, I must say. Pictures of the event are on the sites gallery . Great photography Preveen (our 'official' photo dude).
Post a Comment
Read more

Gambas Tutorial from FOSS-ed for Hackers

- May 26, 2006
The session I did on Linux GUI programming with Gambas, is available online now, along with most of the other sessions. This tutorial should help as a starting point for guys familiar with GUI development in VB to migrate to Linux programming. Happy Hacking !!!
Post a Comment
Read more

- May 25, 2006
Bud , Arunan and I have decided to launch a GNU/Linux magazine for the Sri Lankan GNU/Linux newbie. My article on Kaffeine is available from yesterday. The next article due by me is on amaroK . However, I need to do a dist-upgrade from my Ubuntu Breezy to Dapper to get the latest version of amaroK. So.. Go Kaffeinate yourselves in the meantime... :)
Post a Comment
Read more

- May 24, 2006
A very productive two days at the FOSS-ed ended yesterday. The first day was graced by Professor Lawrence Lessig , a co-founder of Creative Commons who did an excellent presentation on the concept of 'commons' and the importance of 'freedom' for innovation. This time I got the opportunity to conduct a session as well on Gambas. It was a good audience who were keen to learn. I guess FOSS in Sri Lanka is becoming mainstream. It's apparent by the large number of corporate participants along with the university students.
Post a Comment
Read more

- May 17, 2006
Get it here Just got the toolkit up and runing along with a project in Eclipse. I have been trying all sorts of javascript libraries trying to develop a satisfactory AJAX PoC for a while now. I was not very happy with the results. With the Google Web Toolkit, I (mostly a java guy) was able to get a basic 'Hello World' AJAX application running in record time. Eclipse integration is simply great, which brings in the ability to debug AJAX applications in a 'civilized' manner, among other things. The documentation and the samples were very helpful in ramping up. I'm now looking at the RPC and the surrounding architecture. I think this would be the toolkit that made AJAX 'usable' for a broader subset of developers. Hope to see great things in the coming days ....
Post a Comment
Read more

- April 12, 2006
The text below applies for the CDAX version 5.4 (and will apply for past and future versions if the issues are not solved). First and foremost, for the moron who developed the installer and hosted it at the site ... Thanks for nothing !!! . Go and; a. Read the installer creator's manual before writing installers with it. b. Learn Linux before pretending you know how to write installers for it. For the rest of you guys here's how to clean up this mess and set up the CDAX software on your preferred Linux distro. After downloading the .bin file and giving it execute permissions, don't even think about running it again and again. It's a bloody waste of time. Just go to step 1 below. Before going to step 1 , let's dissect what this guy has done. After running the installer and it dying out, there will be 2 log files generated in the same directory. These are named 'errors.log' and 'jinstall.log'. The most important information can be foun
2 comments
Read more
More posts