Portals and Mashups in the Cloud 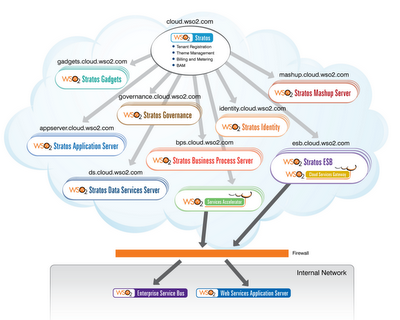 A few days ago Azeez, the senior architect behind WSO2 Stratos wrote a detailed post about its deployment architecture. He tells the story of how we migrated our carbon product stack to the cloud-native platform that we named WSO2 Stratos.

So what does the future hold for portal and mashup developers? How will Stratos change our lives?

As you can see the WSO2 Mashup Server and WSO2 Gadget Server are also deployed in Stratos as cloud-native services. This means that organisations will be able to deploy highly scalable, highly available, distributed applications with ease. And they will be far less expensive than today with a granular, pay-as-you-go model.

This is good news for mashup developers because now we can re-use code and services in a massive scale without an exponential increase in infrastructure costs as our mashups become popular. For instance, imagine that you have a mashup and plan to sell it as a service. The old model would demand that you invest heavily on servers and bandwidth, and then worry about scaling once the demand catches up. With Stratos, you can forget about this initial cost and adopt a pay-as-you-go approach. Scaling takes care of itself, leaving you time and money to invest in making your mashup awesome.

The same story applies for portals both at the portal user level and, a much more granular gadget level. Since users would want to use those super-cool gadgets from your portal in their blogs, web pages and various other places, because Stratos takes care of scalability, you will have more time to promote your portal and its gadgets . Your gadgets are using mashups? No problem.

Actually, if you carefully look at the deployment architecture, you can migrate, mashup and gadgetise any service using the set of products available there. 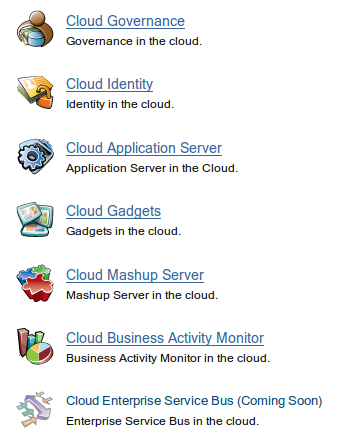 An example deployment of an ecosystem based on WSO2 Gadget and Mashup servers will be similar to that shown below. The portal plays a prominent role helping human users collaborate. But what's noteworthy is the amount of collaboration points for non-human consumers such as third party apps via APIs and Feeds. This type of consumption is usually recursive in nature and the demand is usually unpredictable as your community grows (think Facebook, its users and the amount of Apps).

Soon, with the introduction of WSO2 ESB along with the auto scalability of Stratos, a company would be able to set up an eco-system such as the one above with minimum infrastructure costs.

Anonymous said…
Thank you for the intro, I am glad I discovered Stratos. Please make the registration simple. I do not think people want to give away phone numbers. :)
9:01 AM

I finally decided to get a 3G connection as a backup for my ADSL one at home. I often find myself ending up in places without readily provided Internet and wishing for a mobile solution. After doing a bit of research, I found Airtel as the best deal. If you are wondering about Airtel 3G coverage, all I have to say is that I live and usually spend my time within a 20-30 Kilometre radius from the city of Colombo. And when I go out of this zone, Internet or a Laptop or anything related to work is usually the last thing on my mind :) So getting 3G coverage in rural Sri Lanka isn't a huge priority! That, and the fact that this is a supplementary connection, which means it should cost at least 50% or less compared to the primary connection made the choice very easy. Now for the fun part. Hating how the usual Huawei E220 modem looks, I opted for the more elegant Prolink PHS100, which can be bought with no vendor lock (let's not get started on vendors locking hardware for which I pay
Read more