By Tyrell - September 29, 2008
Gauging the ThinkPad: Before (IBM) and after (Lenovo) has some interesting thoughts on how the Laptop is faring these days. Now, I personally know a few die-hard fans of the old IBM ThinkPad who say the new one just doesn't live up to that standard. The IBM ThinkPad is a tough laptop, that I know. I have seen it survive 'incidents' where other laptops would just curl up and die. So the new one from Lenovo has big shoes to fill for sure.

But the most interesting thing in that post is the graph illustrating repair history for laptops tracked via a Consumer Reports survey from 2003 to 2007. According to that, Lenovo and Compaq are looking pretty good. My personal experience with Dell and HP is not very good. The HP I have is nearly 3 years old and on it's third LCD, second Motherboard and the battery died a few months back. I also have a Dell from work and this thing is on it's fourth battery. We all know Dell and their batteries, so this didn't come as a surprise. 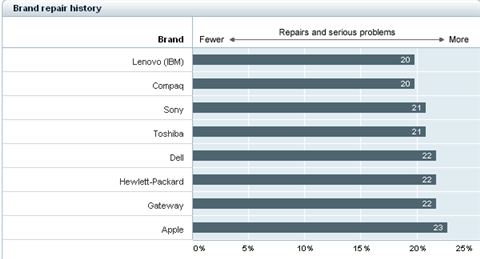