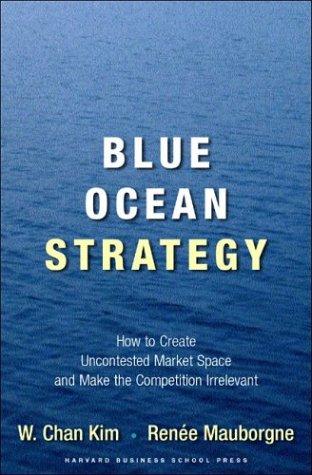 "The metaphor of red and blue oceans describes the market universe. Red oceans are all the industries in existence today—the known market space. In the red oceans, industry boundaries are defined and accepted, and the competitive rules of the game are known. Here companies try to outperform their rivals to grab a greater share of product or service demand. As the market space gets crowded, prospects for profits and growth are reduced. Products become commodities or niche, and cutthroat competition turns the ocean bloody. Hence, the term red oceans.

Blue oceans, in contrast, denote all the industries not in existence today—the unknown market space, untainted by competition. In blue oceans, demand is created rather than fought over. There is ample opportunity for growth that is both profitable and rapid. In blue oceans, competition is irrelevant because the rules of the game are waiting to be set. Blue ocean is an analogy to describe the wider, deeper potential of market space that is not yet explored."

I'm reading this at the moment (as recommended reading) and finding the ideas presented there intriguing. The book has a few case studies, including Southwest Airlines (a favourite among my lecturers, irrelevant of the subject). But being a techie, I needed something from my own industry to make me feel at home and I feel Apple is a good example. From Mac to the iPhone, a common observation one can make is that they usually arrive late to the party. In other words, by the time they realize there's money to be made form a certain technology, they have seemingly arrived to a bloody, Red Ocean.

In the early part of the book, the authors present a tool called Eliminate-Reduce-Raise-Create Grid. This helps carve a Blue Ocean by answering four basic questions.
So I took a look at Apple's first generation iPhone, in order to understand how they, either knowingly or unknowingly, have done it

Which of the factors that the industry takes for granted should be eliminated?
By opting to do so, they surely must have saved a lot during manufacturing, but you don't hear people complaining about it too much either. Why? When I think about it, I have never taken my phone's battery out to get it charged, ever. I'm not talking about the iPhone, I don't own one, I mean the regular phones and smart phones. With today's battery technology, having two batteries and using one while the other is at home charging doesn't make sense. Having a removable battery then, doesn't add value to a phone as far as today's customers are concerned. Yet the phone makers have missed this fundamental change in buyer's value. They are too focused on competing in the Red Ocean benchmarking one another to even perceive the change.


Which factors should be reduced well below the industry’s standard?
But when I thought about it, I realized that cameras in phones never really impressed me either. Every time I see someone taking a picture using their mobile phone, the first thing that comes to my mind is "That's going to be a crappy pic. Good luck!" (or something similar). In fact my old phone had its camera broken and I didn't even miss it. But the industry seems to take a 5+ megapixel camera as a standard . Don't just take my word for it, read the specs of some of the latest phones. Another classic example of how companies compete in a Red Ocean. They invest so much on features that could have been easily downplayed.

Do I even have to write anything here? Here we go ...
Need I say more?

Although I took the iPhone as an example. One can see the same strategy in most of Apple's products, which forces me to think that their secret motto must be "Take toys of Geeks and make them appeal to wannabe Fashionistas". Take a look at their laptops. It's the same strategy. If you see two strangers in a lobby or a coffeeshop with their laptops, one with a Dell and another with an Apple MacBook, what would be your first impression of the two?

Think about it, while I go finish reading my book :)