What's up with pronouncing Nuclear as nukular ?

By Tyrell - October 19, 2008
I'm sure you have all seen how people on the internet (mostly American) make fun of Sarah Palin for pronouncing Nuclear wrong. But I have seen others do the same mistake too.

Forget George Bush, I've heard Lawrence Lessig do it and he's an Academic. I listened to him when he visited Sri Lanka in 2006 and gave a speech at FOSS-ed for hackers one of the local Open Source events. Not that this takes away the respect I have for the good professor, who came up with Creative Commons, but it does get a tad irritating at times.

I thought it was one of those American English things, you know like using learned instead of learnt, Math instead of Maths, spelling centre as center, color instead of colour etc etc. Typical American vs British English stuff. But it looks like I was wrong. I guess they agree that Aluminium isn't pronounced as aluminum either? 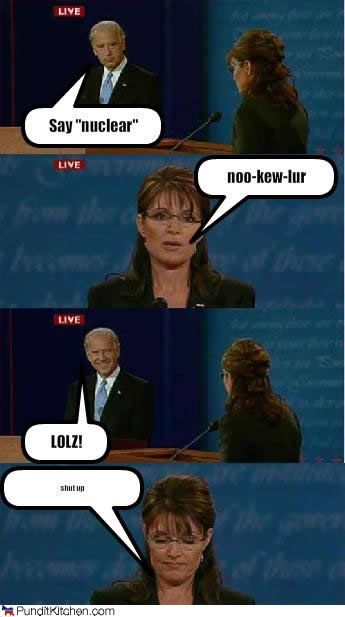